The City of Sammamish is experiencing a high rate of population growth, spurring a surge of building construction in the area. City leaders identified two challenges exacerbated by the increase in development: citizens were frustrated that it was so difficult to access information about development in their community, and the city’s community development staff did not have an easy way to view and edit permit information on a map and share updates with other departments such as public works. Working collaboratively with Sammamish’s city manager and GIS coordinator, FLO built a web map that tracks development activity within city limits. The web map now provides easy access to development activity information for the community and serves as a useful tool for communication and collaboration among city staff.

The City of Sammamish, a community of around 65,000 residents, is located above Lake Sammamish on the Sammamish Plateau in King County, Washington. The city borders the communities of Issaquah to the south and Redmond to the north, and is near the major urban areas of Seattle and Bellevue.

We created the development activity map by first assessing the city’s existing GIS infrastructure and TRAKiT software permitting system to see if information from both could be combined and visualized on a web map. We determined that there was no TRAKiT GIS integration tool available that would achieve our goal, so we proceeded with a custom solution. As the TRAKiT and GIS data were both stored in SQL Server databases, we built database views and procedures to securely connect the key permit information with the land parcel location.

Using ArcGIS Online, we quickly built a web map that visualizes the combined GIS and TRAKiT data. The integrated data are served to the web through ArcGIS Server registered on the city’s ArcGIS Online account, ensuring that the city has full ownership of the map and allowing city staff to easily modify and adjust the application through built-in tools. Edits to development permits in the system automatically update the data underlying the web map, which can be accessed from a tablet, smartphone, or computer. 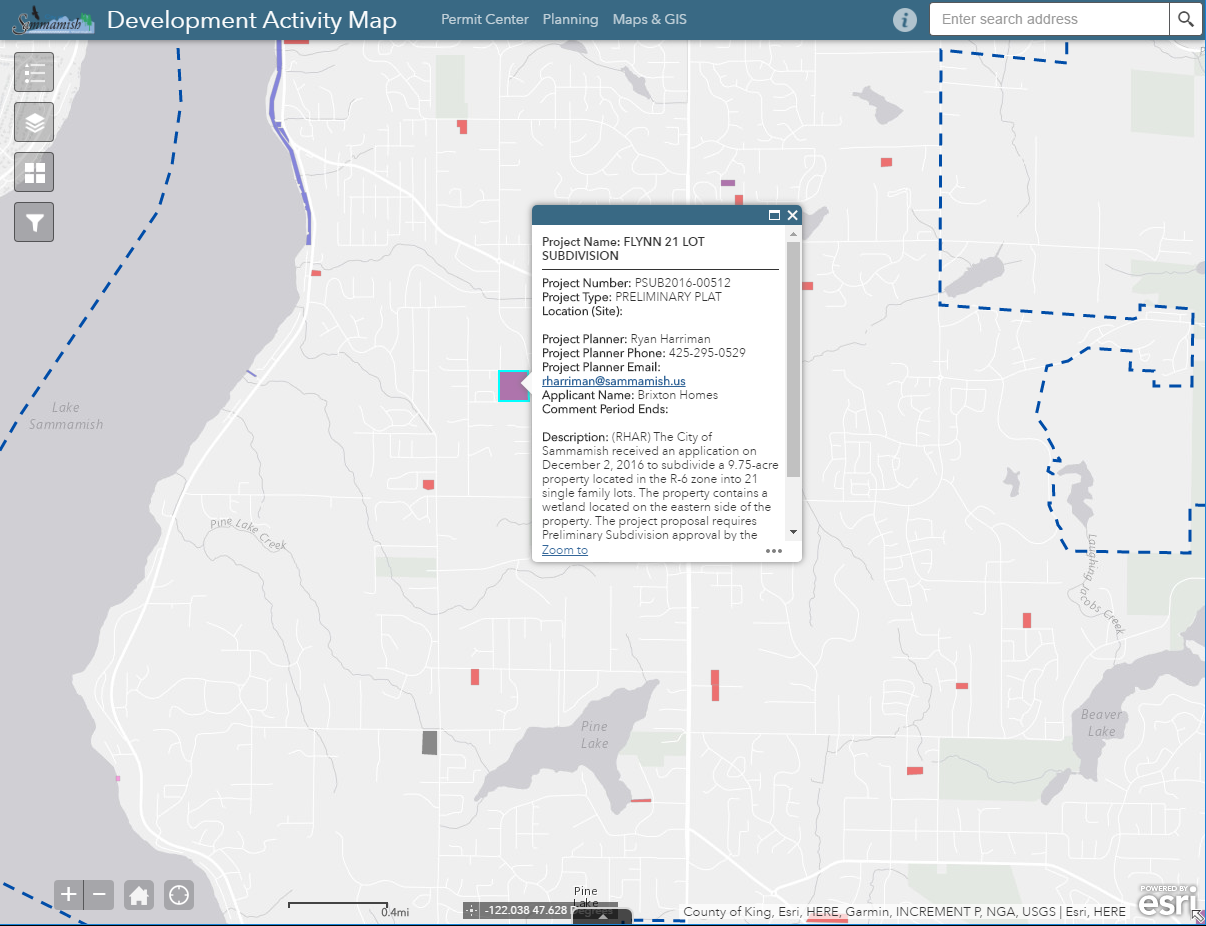 “When big public notice signs appear on empty parcels, they serve to irritate some people twice. Once because it usually means more homes are going up. And a second time because they can’t read the information as they whiz by in their cars. So, in response to numerous requests, the city now has a ‘development activity map’ on its website.”

Want to explore the City of Sammamish’s development activity map?

City of Sammamish is a member of the Association of Cities GIS Consortium, a program that works to improve access to GIS services for Washington communities. Learn more about the AWC GIS Consortium.

“Having someone with the knowledge of a database administrator was really essential in making this work. We did not have that expertise in-house, and that’s what FLO Analytics brought to the equation.”

“The city wanted to deliver up-to-date data in an easy-to-use format with minimal maintenance requirements. SQL views and procedures allowed us to combine data cleanly, securely, and automatically from both the TRAKiT and GIS systems without impacting the use of either, and the map can be managed directly by the city without requiring coding skills.”

This website uses cookies to improve your experience while you navigate through the website. Out of these, the cookies that are categorized as necessary are stored on your browser as they are essential for the working of basic functionalities of the website. We also use third-party cookies that help us analyze and understand how you use this website. These cookies will be stored in your browser only with your consent. You also have the option to opt-out of these cookies. But opting out of some of these cookies may affect your browsing experience.
Necessary Always Enabled
Necessary cookies are absolutely essential for the website to function properly. This category only includes cookies that ensures basic functionalities and security features of the website. These cookies do not store any personal information.
Non-necessary
Any cookies that may not be particularly necessary for the website to function and is used specifically to collect user personal data via analytics, ads, other embedded contents are termed as non-necessary cookies. It is mandatory to procure user consent prior to running these cookies on your website.
SAVE & ACCEPT